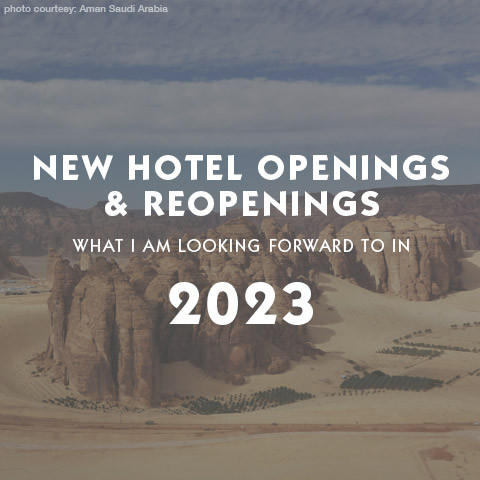 A list of my most anticipated New Hotel Openings or Renovations for 2023. Most, but not all, are Resorts, many are Luxury or Boutique properties. Hopefully they will be bringing something new and unique to the world of hospitality. 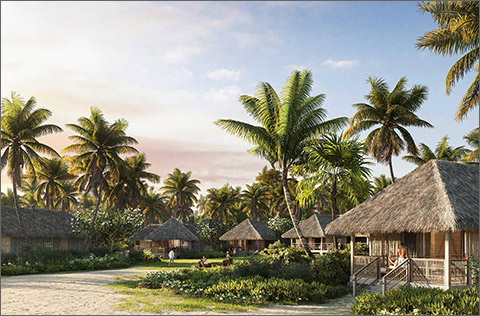 Rescheduled to open 2023
This is one I am very happy to see return. The best resort in Hawaii.

Located on the Kona Coast of the Big Island of Hawai‘i, the iconic Kona Village Resort will once again open its doors and welcome back ‘ohana (family) to the historic and culturally rich destination in 2023. Spanning 81 acres of stunning geologic landscape and richness, Kona Village, A Rosewood Resort will draw inspiration from the history of the site, local culture and natural elements.

Scheduled to open Summer 2023
A new luxury Mallorcan escape is opening in the summer of 2023: discover the Son Bunyola Hotel. Joining the three existing villas, the hotel will be the newest addition to the Virgin Limited Edition collection which launches as Son Bunyola Hotel & Villas in 2023. 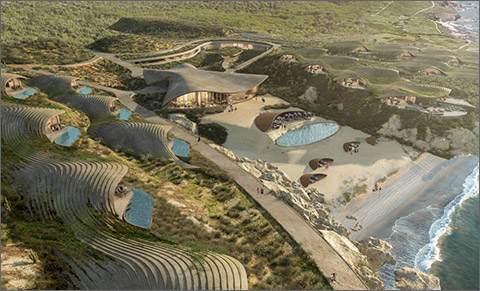 Scheduled to open 2024
Chablé Hotels & Resorts, a boutique Mexican-owned luxury hotel company, announces the development of its third property, Chablé Sea of Cortez. Slated to open late-2021 outside of La Paz in Baja California, Mexico, the future project will bring the brand’s signature concept of ‘redefining wellness’ to the country’s Western region. Upon completion, Chablé Sea of Cortez will feature a mix of luxury villas and residences with uninterrupted ocean view. In addition, the property will boast an expansive spa facility, three dining venues, event space, private beach and ocean- front pool, all spread across more than 698,700 square feet.

Announced to open 2023
Untouched and enticing, this part of the world remains relatively unknown. In ancient times, however, it was a busy trading route, used by the Nabataeans to transport luxury goods like silk, incense and textiles. Along the way, they would set up camp and gather around the fire under a starlit night. In 106 CE, the Nabatean Empire was annexed by the Romans, and Red Sea routes overtook land trading routes. Nabatean cities were no longer centres of trade, and so began their decline.

Six Senses Southern Dunes, The Red Sea is set to open during the first phase of development of The Red Sea Project, which is well underway and on track to be completed by the end of 2023. 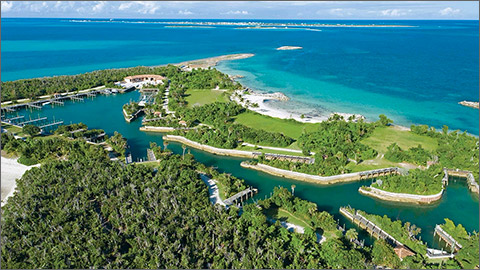 Announced to open 2023
What was once almost to become an Aman Resort, Matt Lowe’s Cay has found a new partner.

Surrounded by the breathtaking turquoise waters of the Sea of Abaco, Montage Cay is a 53-acre private-island resort and residential community that will blend the welcoming, authentic spirit of the Bahamas with the unparalleled service of Montage. Remote yet easily accessible, Montage Cay is located less than one mile from Marsh Harbour in The Abacos and will be home to 50 ocean-view, suite-style accommodations, each featuring luxury outdoor amenities including plunge pools, outdoor showers, private gardens and lounge areas.

Announced to open 2023
Hokkaido is Japan’s untamed northern wilderness, as famous for its summer flower fields as for its legendary ski resorts. On the slopes of Mount Moiwa, Niseko’s finest gem, lies Aman’s fourth Japanese property. The only development on the mountain, it encompasses the country’s first destination wellness retreat and 31 exclusive Aman branded Residences, all set within a nature reserve with unparalleled views of Mount Yotei. 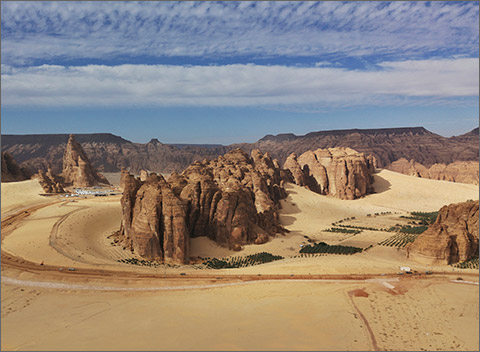 Announced to open 2022 / 2023
Aman, the world’s most exclusive hotel brand, announced its forthcoming debut in the Kingdom of Saudi Arabia in 2023. Following a partnership with the Royal Commission for Al Ula (RCU), Aman will develop three distinct resorts of architectural excellence in North West Saudi Arabia, in Al Ula, a place of extraordinary natural and human heritage. True to the pioneering spirit of Aman, the three resorts will offer an incomparable insight into the Kingdom of Saudi Arabia and its magnificent unspoilt natural landscapes and archaeological sites, which have long remained undiscovered. This development will encompass a fascinating journey to include a tented camp, at one with nature; a sublime resort close to Al Ula’s spectacular heritage areas; and a third development as Aman’s take on a ranch-style desert resort nestled in an otherworldly setting. The vast area of Al Ula covers 22,561 sq. km, and includes a lush oasis valley, towering sandstone mountains and ancient cultural heritage sites dating back thousands of years to when the Lihyan and Nabataean Kingdoms reigned. 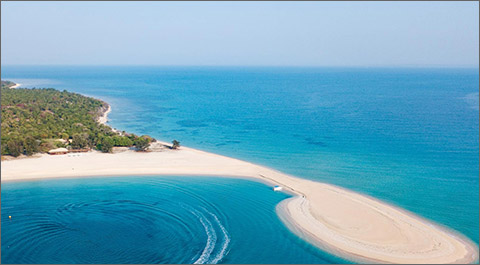 Rosewood Hermana Mayor will be composed of 128 spacious keys of thoughtfully appointed villas and pavilions as well as branded residences, each boasting spectacular sea views and open vistas, and each also seamlessly blended into the lush tropical forest to showcase the natural setting of the island. Every building will be positioned to maximize stunning sunset views of the South China Sea.

Conveniently located just ten kilometers from the mainland and under two hours from Hong Kong, Rosewood Hermana Mayor is easily accessible by boat or plane. The stunning 500-hectare uninhabited island is home to several distinct microenvironments and has become a natural sanctuary for the area’s distinct flora and fauna. 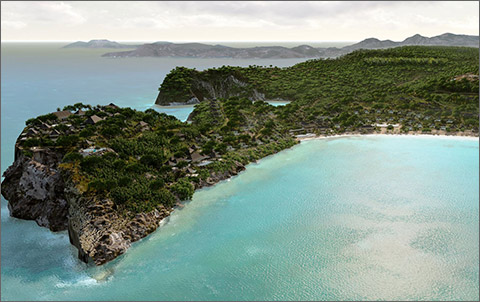 Revised to open 2025
The resort will be situated on 132 spectacular oceanfront acres along Half Moon Bay, which is internationally lauded as one of the world’s most spectacular beaches. The former Half Moon Bay Hotel was established in the 1950’s, and for decades was a sought-after vacation destination and resort playground for the international jet set. A serene oasis for discerning travelers, the resort will feature 47 pavilion-style suites, each with breath-taking ocean views and thoughtful amenities finely tuned to the desires of today’s affluential explorer, including private infinity plunge pools, hammocks, open-air baths and showers and live orchid walls in each bathroom. The resort will also offer an exclusive residential component comprised of oceanfront and oceanview villas, and 13 extraordinary estate home parcels. 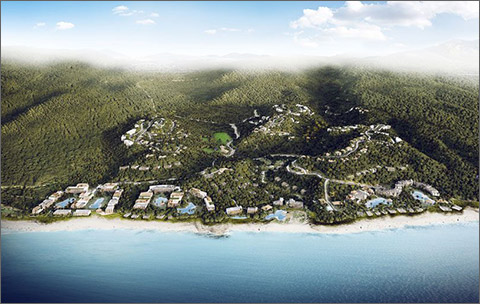 Announced to open 2023 – 2025
An intriguing new project from Marriott.

Marriott announces plans for first all-inclusive resorts, and the building of the planned NIA resort complex in Riviera Nayarit, Mexico. 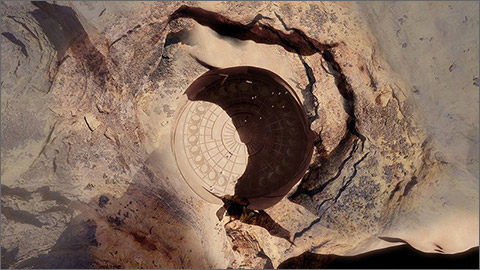 This is the exciting new entry, built into the mountain itself. From the design team of the Louvre Abu Dhabi and the new National Museum of Qatar. A stay at Sharaan may prove a destination in itself. 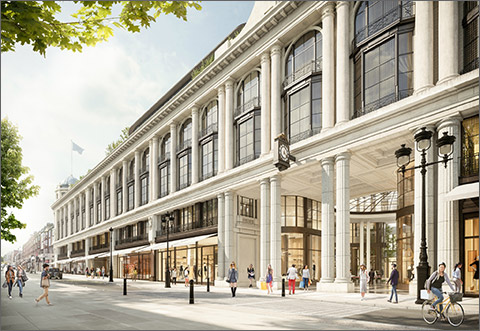 With its proximity to Hyde Park and Kensington Palace, Bayswater in West London is recognized for its streets lined with grand terraces of white stucco houses and garden squares. The hotel, wellness club and spa mark the brand’s entry into the UK and will open with 110 guest rooms and suites, starting from 355 square feet (33 square meters) and celebrating the building’s origins, while making space for modern living. There will also be 14 branded residences, with owners able to tap into all the privileges that come with a Six Senses home, including bespoke interior design, concierge service, dining, housekeeping and wellness programming.

Announced to open 2023
Rosewood’s first property in the Netherlands. Housed in the former Palace of Justice, a building of great architectural, historical and social significance that overlooks the Prinsengracht (the Prince’s Canal), one of the city’s most beautiful waterways, in the UNESCO World Heritage listed Amsterdam Canal District. The hotel will be ideally situated near many of Amsterdam’s finest attractions including the museum district, the high-end shopping district on P.C. Hooftstraat and the hip De Pijp neighborhood. With its central location and an intuitive design carefully conceived to offer an inviting and amiable atmosphere, the property is poised to serve as an unparalleled gathering place for visiting guests and the local community alike.

go to: New Hotel openings for The Future