I do love referring to single class aircraft as “No Class”. But it is an unfair image it may conjure up. And this was a well executed commuter style flight for those who have to go back and forth between the two cities. The only reason I am on this particular segment, is after the initial booking, Air Canada changed the departure from GIG to GRU, and I had my heart set on flying on an AC Dreamliner International Business, and did not refused to fly United, the other option, so add this small flight prior to the 8:00pm departure out of GRU.

I wanted to get to GIG a bit earlier than usual. I suspected that checkin would not be so smooth, and glad I did. Overweight luggage, which I suspected and not able to pay online, knew it would be an up-charge at checkin. But payment can not be accepted at the counter, had to go to the customer service desk, where there was no one servicing customers. Finally a young lady appeared from the back room, and helped one of the two gentlemen in front of me, and suddenly, her shift was done. Someone new came in and started booting up his terminals, an endless process. Make a long story short… technology was not this mans friend, and eventually they just handed over the boarding passes with luggage claim… yes a charge was done but no record that could be printed. Avianca Brazil needs a bit of IT help over here, not quite ready for Prime Time.

Since the Olympics were over, they moved domestic into the new Terminal, so they can spruce up the older Terminal, so getting to our A gate was quite a hefty walk. I wanted to check out the lounges, but no time, all taken up at checkin. Boarding starts and all is quite smooth, once seated the flight slowly fills up, and I must say that the Brazilians dress quite nice, you know you are not in the USA for sure. It’s nice to see people taking a bit of pride in how they dress, even a simple flight as this.

We take off into a storm, but still get a few great views of Rio before we hit cloud cover. A snack and 45 minutes later we begin our approach to Sao Paulo. Easy Peasy, as those older brits say at times. As we taxi to Terminal 1, I spot our Air Canada jet hanging out and chatting with all the other jets. It’s the older livery (was hoping to see the new one up close) but not this flight. Land and collect the luggage to schlepp over to Terminal 3, but a leisurely stroll through GRU is fine for this AVgeek. 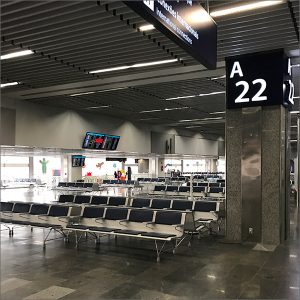 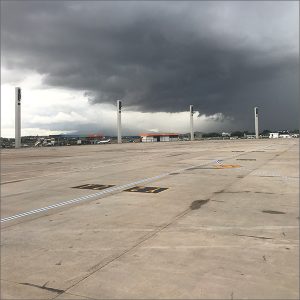 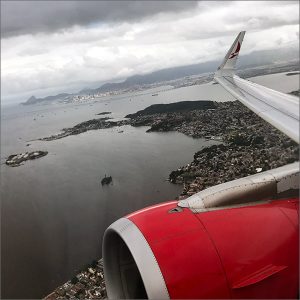 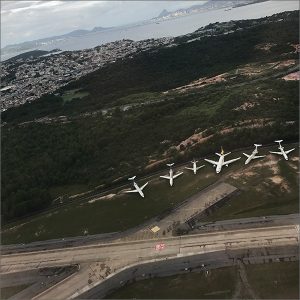 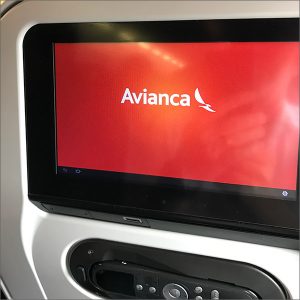 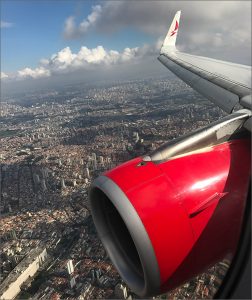 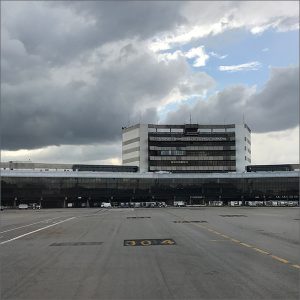