With a friend’s birthday in New York, thought this would be a perfect opportunity to do an airline comparison, a smackdown so to speak. Easy to book one-way tickets between Los Angeles and New York, and try a few different airlines I haven’t flown in a while. And all the major carriers (the Legacies) fly this route, so it makes a real good way to see how they treat the majority of their customers, which means flying in economy. The last time I flew United from the East Coast, was in First, and it was a miserable experience, but with all the recent hoo-haw with the crazy Doctor, hoped that they would put their best foot forward. Flying out of EWR Newark for my first time was also part of the adventure, since United abandoned their slots at JFK. EWR Terminal C check-in was efficient, however bag drop a bit inefficiently run. The whole check-in area looks like they just moved in, and needs some pizzazz or something. TSA-Pre went quick and I was airside quickly. Terminal C is all United, so there are no alternate Lounges… but I have United Club access, so went in for an inspection. Well… the lounge is better than no lounge at all, but needs an update. Frumpy! And the bathrooms are small and not that different from the main terminal, and not any cleaner. So I grabbed a cookie and left to get some lunch before the flight.

Got to the gate at the perfect time for my boarding, so just strolled on board the 757-200. But this is most definitely not a new craft or interior. At least there was room for my things above the seat, because there was no room under the seat with that old In-Flight Entertainment (IFE) box taking up half my footing area. At least there was a blanket, but with no place to put it. Sitting down, this was a knee-knocking seat for sure. Don’t know how people would survive this on an even longer haul. Half way into the flight, this is the first flight ever, my leg began to cramp for the awkward space.

The IFE in the seat back, was at least free of charge, though mine did not work. Stuck in Spanish, and the poorly placed headphone plug had a snapped off post from the previous user, unusable. United does offer a use your own device option, but it too never seemed to be able to hook up to the movie, only the trailers. I kept getting a bad network notice on my iPhone. Thank goodness I bring my own on the iPad. Glad I brought my own snacks too, the pickings were slim on this flight, and I never bothered to look at the buy your meal options.

I can usually tell if the service will be good or not if the Flight Attendant reads a book or magazine in their “spare” time. Magazines mean they are fine with interruptions to do their job… a book means don’t bother me I’m reading, and usually means mediocre to the bare minimum of service. Though the book reading FA was pleasant, the “Fly the Friendly Skies” was long gone from this FA’s eyes. As we all deplaned, one of the FAs did say a nice goodbye, but the rest of the crew was just a bit stone faced to all the passengers. It made me more glad this flight was over.

But United just didn’t want to stop disappointing on this adventure! I know it takes time to get luggage to the claim area… so I always take my sweet time getting to baggage claim, checking out future lunch or gift places in a Terminal, where to shop for a travel gift, etc. Finally at Claim #3, and the bags just would not arrive. A couple folks are starting to get angry. Finally the bags start to arrive, and just as they unload a bit, the belt stops for several minutes, just salting the wounds of a few. After a bit, it finally started to move again, but it was a final added black mark on this flight.

In the end, a sad and very mediocre flight with old product. It just felt like a grey cloud was hanging over everything. United needs to glue it’s act together if it wants to be part of the supposed Big Three Legacy Airlines… cause right now it is just a over-priced Low Cost Carrier. On the LAX/NYC route, United is a do not fly option at this time. 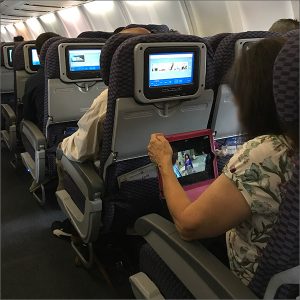 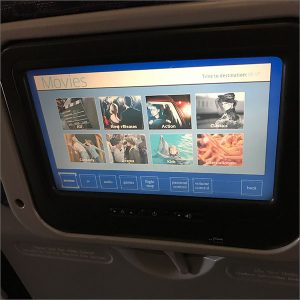 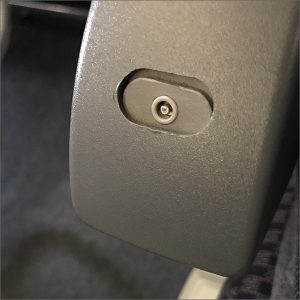 United Airlines UA1165, anyone onboard have a needle nose pliers?