With a friend’s birthday in New York, thought this would be a perfect opportunity to do an airline comparison, a smackdown so to speak. Easy to book one-way tickets between Los Angeles and New York, and try a few different airlines I haven’t flown in a while. And all the major carriers (the Legacies) fly this route, so it makes a real good way to see how they treat the majority of their customers, which means flying in economy. The last time I flew Delta, was to Lima, Peru… and wasn’t a bad experience. But, previously to Hawaii in First, an expensive and shamefully bad flight both ways. So I had my fingers crossed…

I do hate early morning flights, but I wanted to be in New York in time for dinner with friends, and I knew check-in at 6:30am would be quick. Delta was about to change terminals, so no telling what may be happening, arrived a bit earlier then needed. That would give me time to go to the Delta Sky Club for a quick bite, and plane spotting. The Sky Club is an extremely good lounge for LAX, though it does get very busy. Curb side baggage drop fast, and TSA-Pre almost faster, I was airside with hours to spare.

Boarding at Gate 57 was a bit clumsy, being that no one could hear the announcement of only our flight, and the screens above boarding appeared not to be working. After boarding, stowed my things in the overhead bin and got settled in. Though not new, the cabin looked well cared for and the leather seats rather comfortable and clean. Surprisingly, I did not feel as cramped as I prepared for, and was not regretting to not have upgraded to the more space options. The In Flight Entertainment (IFE) screen was rather large, and the USB Port and a standard headphone plug right there under the screen, easy to find. And the seats were the kind that don’t slam back when reclining. This Delta cabin is well thought out.

After takeoff I watched a movie (Hidden Figures, which I rather liked) and they served a light meal, perfect to keep the passengers from getting “hangry” on a long flight… and then later even another small snack. And before you knew it, we were landing.

JFK – Terminal 4 is quite nice, and abuzz with host of flights departing, and by the time I got to Baggage Claim my luggage just arrived. I was impressed (or lucky), but Delta delivered a great flight in Standard Coach, one that I would have no problem flying again. 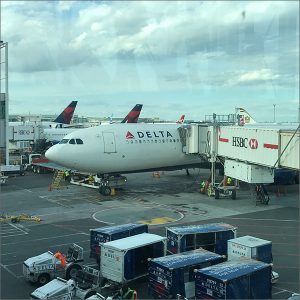 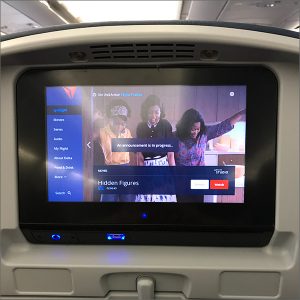 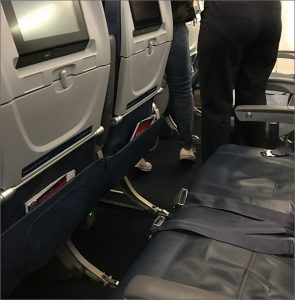