Segment: UA 294 / SEA – SFO
Seattle to San Francisco, is a relatively quick hop. Having not flown United in many years, I was pleasantly surprised with the setup of the A320. Economy is not the most comfortable I’ve been in, but more than tolerable for approximately 2 hours.
No food service apart from a snack and beverages. But I was excited that the snack was Dutch Stroopwafels. A nice change from the standard mix on other airlines and satisfying for my sweet tooth. Segment: UA 869 / SFO – HKG
Everything that started so well with the short flight to San Francisco quickly went down hill with this flight. We were on a 747 for this one and I’ve always admired those planes but only had one other experience flying one on Lufthansa. Well I must say, the 747 can be excellent even in economy when the airline maintains their equipment. Sadly United is no Lufthansa.

Upon boarding I found that economy lacks any kind of personal entertainment system. Immediately after that I began hunting around my seat for a USB port to power my device(s). No luck on the USB front, but not surprising since the interior of the economy section looked like it was from the late 90’s, maybe early 00’s. Eventually I located the power outlet, down by my feet between the seats. Poor placement, but even more frustrating when I found that the outlets in my row did not work.
After takeoff I tried the United Private Screening feature since I had taken the time to download the United app while waiting in SFO. All I can say is the system was a total failure. I was unable to get a single movie or tv episode to play. The flight attendant couldn’t figure out the issue but it was not confined to just me. No one in economy, that I could see, was able to view any entertainment from the airline the entire flight.
There were 2 meals and a snack served. All eminently forgettable. With the exception of breakfast with the worst pancakes I have ever tasted. I have no idea how they managed to get the top to be overly soggy and the bottom rock hard. An amazing feat, but terrible to eat.

In summary, the truly worst experience I’ve ever had on one of the longest flights I’ve ever flown. Not a winning combo and a reminder why I stopped flying United years ago.

The Fussy Flyer comments:
Poor Herr Abenteur, United has since replaced this poor old 747-400 with their new 777-300 service. Same cramped space in the back, but hopefully all the electronics should have been working for a while. I heard they are having problems with the Wifi on this flight. 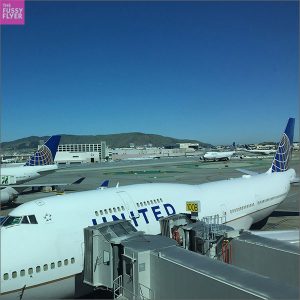 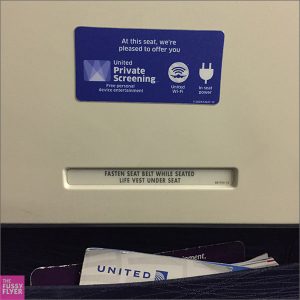 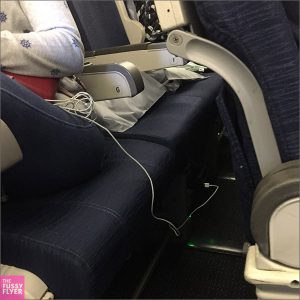 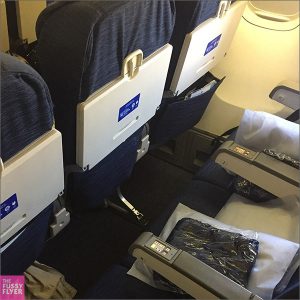