I don’t fly much domestically, but with visiting friends in Denver, thought a good way to sample American Airlines (AA), and save 34,000 miles about to expire. Pricing out the flights, AA proved to be about the same as the LCC, but with more legroom and I would hope a better caliber of service.

I am happy to report that the flight both ways was absolutely a fine flight, on par with my Alaska experiences. The Plane felt fresh and the seating in clean and great condition. The Flight Attendants (3 for economy) came through several times and even offered a small snack. And for a two hour flight, there was 3 times more attention than my previous United 5-hour TransCon Flight from EWR to LAX United Airlines UA1165. AA had pleasant and attentive service from start to finish, something United was seriously missing.

I did purposefully try both the standard (31″ pitch) and Main Cabin Extra (34+” pitch), and quite frankly didn’t see that much difference on a 2 hour flight, though the extra room is always a twee bit more nice, worth the $35.00 extra, sorta. I did like that the seating does not have that dreaded IFE box that many other 737-800 operators have, Alaska for one. And American had all the same electrical outlets, and even had the funny little drop down screens for not only the Safety Video, but actually showed TV on it… haven’t seen one of those in quite some time.

On the ground, check-in and baggage claim, in both LAX and DEN were a breeze, but beware DEN TSA, that was a zoo, but that is more an airport thing rather than AA. Baggage came swiftly at both arrivals, so good service there. Great flight and service at a good cost. Time to go and explore more of America! 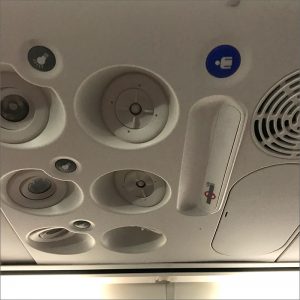 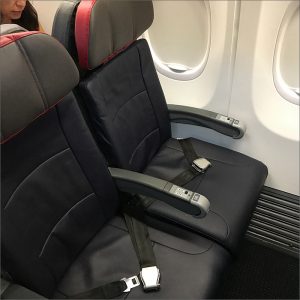 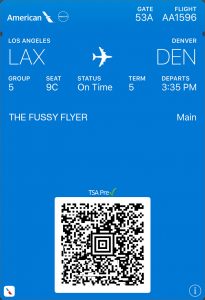