Traveling often up to Seattle from Los Angeles, for me, using Burbank’s Bob Hope Airport (BUR) makes it super easy. Alaska usually has about 3 flights a day, so the two hour flight has options and none of the hassle of flying out of LAX. And I have always thought that Alaska offers a good service and generally at a good price. And with family in Seattle, I have the need to go up regularly. This flight makes me wish they could service more cities out of BUR, but no such luck. The other option to Seattle is Southwest, but that is with a stop and plane change and doubles the time of flying.

For the most part, Alaska flies the 737-800 on this route, and the seating in both First and Coach is pretty comfortable overall, with Coach having a decent amount of space. And there is the more legroom option that you can pay for or get if you are on their Elite Mileage Program. In Coach the meals for purchase are somewhere between a snack and a meal… perfect for a 2 hour flight. And I never mind paying for a meal in coach, they tend to be better preparations than the ones that come free with some flights.

One of the big differences from many of other carriers, is the lack of built in In Flight Entertainment (IFE). They offer a free Alaska Beyond™ Entertainment, that you stream on your own device using the GoGo Entertainment Ap. I always bring my own preloaded entertainment on the iPad, but have dabbled in the past with the offering with mixed results. And it is one of the downers if you are used to Jet Blue or the Virgin America systems. The also offer a Free Chat system through their WiFi system which is handy, so you can keep in touch with those on the ground without having to pay for the WiFi. They do have a great power supply for each seat, which why there is still that dreaded Box in the legroom area.

The Attendants and crew generally are very engaged (in a good way) with passengers, so overall a good to great flying experience. And they do have a great Mileage Program, one of the last based on miles flown… it actually pays to go on mileage runs with Alaska, a dying sport.

Carry-On Pet Advice:
Remember that only one can be in the First Class area, so make sure to contact the Customer Care upon making the reservation to reserve the space. Non-First Class does not have the same restrictions. 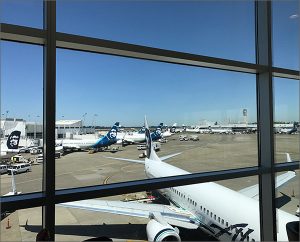 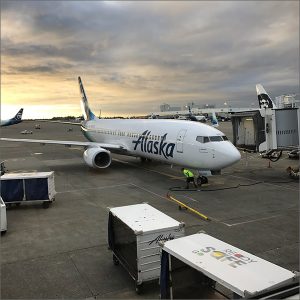 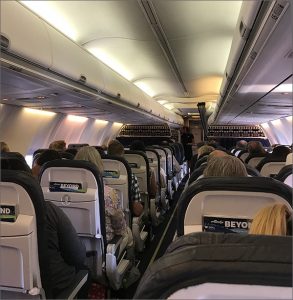 Alaska Airlines Standard interior prior to the new livery. 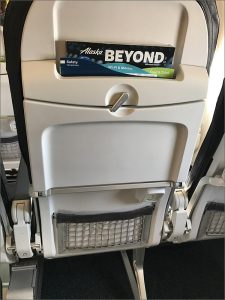 Alaska Airlines Standard Seat Back in the B737-8/9 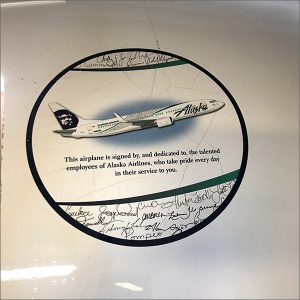 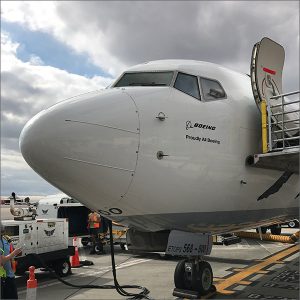